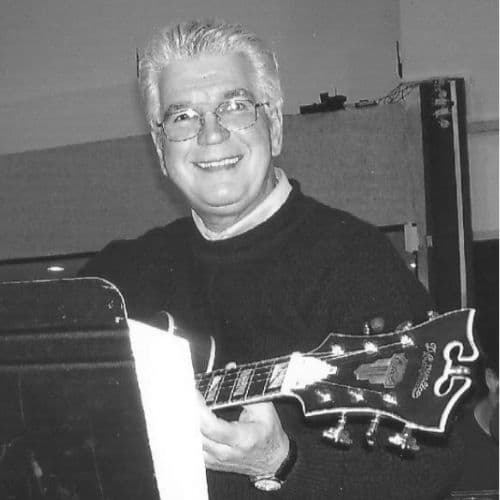 Pete, a native of North Tonawanda, New York had a wonderfully successful and varied musical career, in spite of being told at a very young age by one of his music teachers that he wouldn’t amount to anything. He picked up a guitar that was sitting on his grandmother’s porch for years, taught himself to play and then ventured out on a life-long passion and profession. At 18, he went on the road with other talented musicians from Niagara County; was booked by the legendary William Morris Agency and toured extensively along the US East Coast. After a few years of touring, he was drafted and became a member of the US Army band stationed in Germany, where he also gave private music lessons to officers’ children. After his honorable discharge, he performed and toured with Brenda Lee and Ronnie Milsap; earned a bachelor’s degree from UB in Classical Guitar and later a master’s degree in Music Education. In the early 70’s, he taught music at Sweet Home Junior High School and later at Niagara County Community College. He initiated guitar ensemble programs that continue to this day at both schools. Pete also played, as well as composed, produced and arranged music with the Melody Fair Orchestra for many years accompanying a variety of famous entertainers. In 1961, he was a member of an R&B group that opened for Ray Charles in Atlanta; in the 80’s he played a two-man show with Tiny Tim aboard the SS Norway luxury cruise ship and in 1984, was a guitarist with the band in the nightclub scene of Robert Redford’s ‘The Natural’. Locally, he played at several venues including a long engagement at Salvatore’s Italian Gardens. Pete also had scores of private students; some went on to be recognized as acclaimed musicians such as renowned classical guitarist Nathan Klosko; banjo virtuoso Ted Rose; as well as guitar virtuoso and Niagara Falls Music Hall of Fame 2017 Inductee Jamie Holka. Pete formed The Stringed Edition and Turned on Guitars; two ensembles of his finest private students who performed on the steps of the Capitol in Washington DC, Disney World and Sea World in Florida. In the 80’s, Pete ran summer guitar clinics at Artpark in Lewiston NY. He created an immensely popular program, ‘The History of the Electric Guitar’ that he presented at high schools and colleges throughout New York State. He was a member of the popular local Dixieland band, The Bison City Stompers. Pete had many of his arrangements and original compositions published, many can still be heard today through www.uncjazzpress.com by entering ‘Pete Hankinson’ in the Search Bar. For decades, the Riviera Theater in North Tonawanda featured a Pete Hankinson Christmas Concert, which was also performed at various other venues around Western New York. An album was released in 1990 featuring Pete’s arrangements of favorite Christmas songs. Also at the Riviera, in the late 70’s, he utilized members of the Buffalo Philharmonic Orchestra in a concert of his original compositions. He also brought nationally recognized performers to Western New York and promoted the shows. In 1991, he presented jazz guitarist, Mundell Lowe at the Tralf and again at the Lancaster Opera House. Mundell performed with Pete’s The Stringed Edition. Pete also created the ‘Gateway Cities International Jazz Festival’ which ran for three years at Gateway Park in North Tonawanda. He was not only the creator, but also ran the concert and was master of ceremonies. In addition to all of his musical accomplishments, Pete designed, patented, marketed and sold watches and clocks designed specifically for musicians and music lovers; The Chromatic Watch. His watches and clocks, that feature the musical scale rather than numbers, have been selling around the world for more than 40 years. Pete also created and published a Guitar Chord Diagram book, which has been a great aid for students. Pete’s son Eric still runs The Chromatic Watch Company today in North Tonawanda New York., We would like to quote a friend of his family who wrote to us stating that ‘Pete was always a gentleman, always low key, quick with a smile, a joke, a kind word, and a genuine interest in you and the endless possibilities ahead.

As a musician, composer, producer, arranger, promoter, teacher, author and inventor, we are extremely proud to honor and welcome William ‘Pete’ Hankinson as a Legacy Inductee of the Niagara Falls Music Hall of Fame Class of 2021.