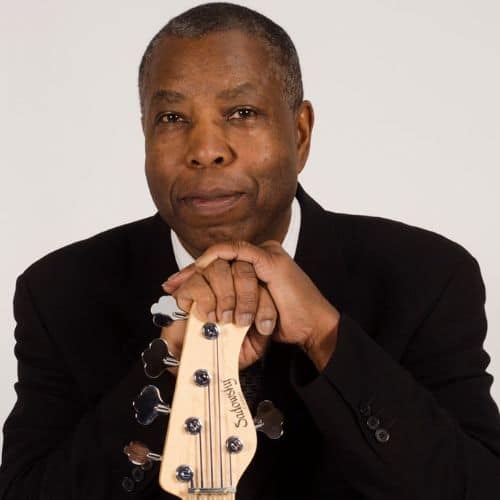 With over 50 years of musical experience, Thomas Nelson is a bassist and vocalist currently located in the Niagara Region of Ontario Canada. He has performed in clubs, concert halls and festivals across Canada, Europe and the United States, and has appeared on many CBC television and radio shows. Although he currently calls Niagara Falls, Canada his home, his influence and inspiration have remained rooted on the New York side of the border. In 1962, Thomas began as a soloist in the New Hope Baptist Church in Niagara Falls New York. In 1966, he became the bassist for the Bethlehem Revival Temple and Pastor Adams’ Gospel Band, giving praise a bit more soul in church services and at special events. In 1967, he joined Reverend Ware, a popular Evangelist in Buffalo, performing for various church events across New York State. Thomas has been known to credit his music teacher at LaSalle Junior High School, Mrs. Smith, as one of his greater influences. At the age of 16, Thomas joined other teenage musicians at LaSalle Senior High School to form the group Supreme Soul, lending his vocals to the talent. At that time, he also joined the group London Fog. From 1968-1974, Thomas provided lead vocals and bass for the local bands Purple Gas, Earth Family, the Shredded Wheat Band, 4 Way Street, Liberation & Brimstone. Playing at all the city high schools, Rec & CYO dances, a variety of fraternity and sorority events, night clubs, public, private and corporate events in Niagara Falls and Buffalo New York, Thomas worked diligently to promote and inspire positive integration for musicians of color in the local music scene. Thomas has considerable touring experience: As a member of Terry Dee’s Rock and Roll Circus, in 1974 he toured throughout Canada and the United States College-University circuit, and opened for Peter, Paul and Mary at the Ohio Folk Festival. In 1978, with Colleen Peterson, a Canadian country folk singer, he performed in festivals in Toronto, Kingston and Ottawa, Ontario, as well as opening for the Gordon Lightfoot Spring Concert Series for nine evenings at Massey Hall in Toronto. As a member of the group Unity, Thomas performed in a 1980 New Year’s Eve celebration in Madeira, Portugal. He toured extensively with the group, Mark Haines and the Zippers for four years in various venues located in Toronto, Halifax Nova Scotia and St. John’s Newfoundland. In 1984, he received recording credits on Mark Haines and the Zippers’ song ‘Radio Jungle’. From 2007 to 2010, Thomas was a member of the Buffalo-based band, Soul Providers, performing throughout Western New York. In 2015, he formed his own group, The Thomas Nelson Band. They have a 2017 recording; ‘Live at Charles Daley Park’ and to this day play extensively throughout Ontario’s Niagara region. Throughout his five-decade career, Thomas has performed with some of the best in the business on stage and in studio. To top it off, he is also an actor with Cube City Entertainment, founded by producer/screenwriter, Roberto Munoz, who works with independent filmmakers. Thomas Nelson appears in two full length films; ‘Lazer Us–The Legend of Jimi Lazer’ (2014) & Lost Penny (2016).

With honor and pleasure, we welcome Thomas Nelson a member of the Niagara Falls Music Hall of Fame Class of 2020.