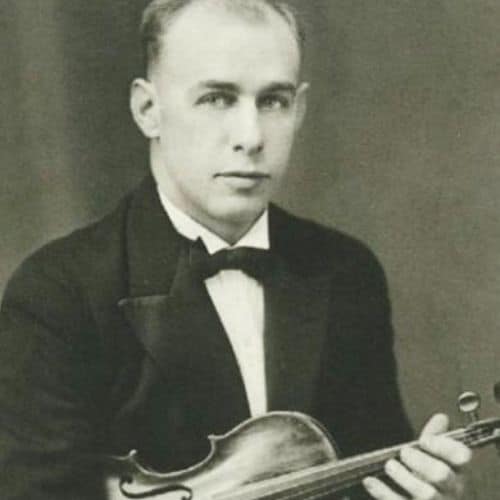 Professor Szczepan ‘Stephen’ Wieloszynski, was a well-respected violinist, teacher, orchestra leader, and music store owner in Niagara Falls New York. He was a son of Polish immigrants who instilled him to work hard and devote time to helping youth. The 1920s were busy years for Stephen. He became a journeyman electrician, but his love of music lead him to study violin, piano, harmony and music theory at the Toronto Musical Conservatory. When Stephen completed his studies there, he accompanied his parents on a trip to their homeland of Poland, which had become a free nation after WWI with a marvelous rebirth in the arts and music. The creativity of the Poles was abundant, building upon the works of the past masters like virtuoso violinist and composer Henryk Wieniawski, virtuoso pianist and composer Frederyk Chopin, and the great Polish opera composer Stanisław Moniuszko. Upon arriving, Stephen continued his musical studies in Poland. He did not return to Niagara Falls until September 1927. Upon his return, his musical talents were immediately recognized and he was soon known as a virtuoso on the violin. He was also known for sharing the beauty of the music he created, performing concerts on radio stations WGR and WKEN Buffalo. He shared the beauty of his music also through live performances at the Echo Club, the International Institute, Zaleski Hall, Holy Trinity Hall, Holy Trinity RC Church, St. Stanislaus Kostka RC Church, Niagara Falls High School and numerous parades for over 40 years. The Stephen Wielosznski Band marched every October in the Pulaski Day Parade in Buffalo New York. He was the Director of Music for several midnight masses at Holy Trinity RC Church, Director of Music for the Echo Society Concert programs, and Director of the Choir for Wieniec Polek Society. He was also a wonderful music teacher. In 1930 he began offering lessons to students at his residence and in 1931 was on the teaching staff of The League for the Promotion of Music which offered free music lessons to students through the cooperation of the Wurlitzer Music Company. Soon he opened the Wieloszynski Music Store on Niagara Street in Niagara Falls. At his store, he taught piano, accordion, xylophone, guitar, trumpet, cornet, trombone, French horn, baritone horn, tuba, clarinet,
saxophone, piccolo, flute, violin, viola, cello, and bass fiddle. In the 50’s, when playing the guitar was the rage amongst young students, he taught himself the guitar in order to be able to teach it. If someone wanted to be in a marching band and played an instrument like an accordion or piano, he would teach them the snare drum or cornet so they could march. His store was the place to go to buy classical and ethnic music. He assembled and rehearsed marching bands and orchestras consisting of his students. They performed at numerous community events like the Zone 4 Little League opening day parade, First Holy Communion processions at Holy Trinity & St. Stans RC Churches, the St. Patrick’s Day and Pulaski Day parades in Buffalo.

Professor Wieloszynski wanted to provide the youth in the city of Niagara Falls the opportunity to play a musical instrument and appreciate the beauty of music. Rentals and lessons were made affordable for all families. The marching bands and orchestras that he assembled and rehearsed provided his students with the experience of ensemble playing, which positively impacted the musical programs at four junior high schools and four high schools we had at one time in Niagara Falls. His teachings resulted in significant contributions to the local, national and international music
industry via the students he taught. He was able to instill a love and appreciation for all music in students. Through his work with the International Institute, he was able to play and teach folk music from a variety of European countries, i.e. Poland, Lithuania, Italy, Germany, France, Russia, Ukraine, Greek, Armenia, and Spain. Stephen was also a very proud and patriotic American. He could always be called on to provide music for patriotic events.

In 1929, the Wieloszynski Orchestra provided American and Polish classical music for a memorial celebration to commemorate the life of General Count Casimer Pulaski, who lost his life while fighting for America in the Revolutionary War. In 1932, his orchestra performed at a gathering to honor
the memory of George Washington. Selections by the orchestra included ‘Star Spangled Banner’, ‘American Airs Overture’ and ‘Father of the Country We Love’. Realizing at an early age that it took money to purchase instruments to sell and rent, stock a store, support a family, provide the best
education possible for his children and maintain his musical prowess to play the violin at a virtuoso level, he made the decision to supplement his income by working as a journeyman electrician during the day, and also commit himself to his family and musical pursuits. By doing so, he was able to give the Wieloszynski Music Store the distinction of being the longest running music store in the history of Niagara Falls. His sacrifice and patience enabled him to fulfill his goal of providing the youth of Niagara Falls the opportunity to play a musical instrument and appreciate the beauty of music. Because of his commitments, the musical accomplishments achieved by his daughter; Joan Wieloszynski Smutko, and his son; Stephen J. Wieloszynski Jr. multiplied the impact of his life goals by tenfold. Furthermore his influences also lead to phenomenal musical accomplishments achieved by his grandchildren to this day.

Therefore, it is with great pleasure that we honor and welcome Professor Stephen J. Wieloszynski, Sr. and his legacy in the Niagara Falls Music Hall of Fame Class of 2018.