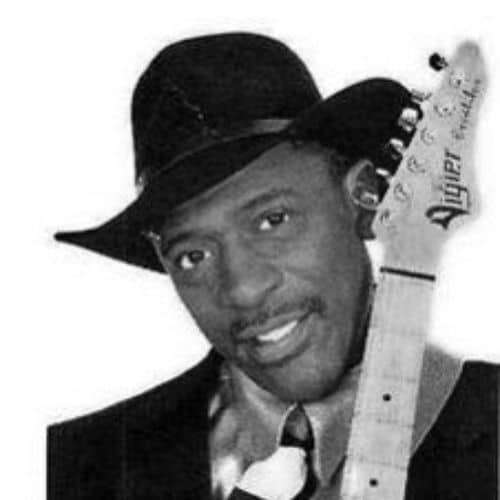 Ron ‘Rock’ Laster Began his musical career playing violin under the teachings of Wilbur Hatch, who was musical director for the I love Lucy
Show! After six years of violin training, he developed a feel for the guitar and cried until his dad bought him a guitar and small amp. As a
young teenager at North Junior High School, Ron became very fluent in French and through his high school years had high honors in Math and Science. However, the schools he attended did not offer guitar lessons, so he decided to teach himself and it paid off. After graduating from Niagara Falls High School in 1972, Ron formed his own band “The Fabulous Fadelics” which later evolved into the band ‘A Whole Lotta Thang with Kathy Jordan’. It became one of the hottest bands in Western New York and Southern Canada. Ron was recognized as one of the top funk guitarists in the United States. After a brief stint gigging with Rick James & The Stone City Band, Ron joined The Jerry D’Amico Group, which later lead to a meeting with Ann and David Weston, who arranged for him to audition for the JB’s; the James Brown Band. James Brown immediately recognized Ron’s talent and hired him on the spot as a lead rhythm guitarist behind the late great Jimmy Nolan†. While touring and performing with the JB’s, Ron also became backup Master of Ceremonies to the Great Danny Ray, and later musical director. In 1984, James Brown’s Rhythm section, along with Ron, was nominated for a Grammy award for the song ‘Today’ as Best Instrumental Song of the Year. Ron performed and toured with James Brown from 1978-2006. He shared stages and performed with the musical greats: BB King, Aretha Franklin, Carolyn Franklin, Prince, Michael Jackson, Robert Randolph, Fred Wesley, and Maceo Parker to name a few. Ron’s guitar talent is one of the best in the industry, and has been heard on HBO’s ‘The Wire’, The Tonight Show with Johnny Carson, David Letterman, Good Morning America, Arsenio Hall, as well as European television. Recently, Ron was instrumental as music director and band leader for a tribute play called ‘Down Around Brown Town’, written & directed by Frit & Frat Fuller, with a performance by Dorian Harewood that played in various US cities. Along with traveling around the globe for 28 years with the Godfather of Soul, Ron formed his own band the ‘Master Blasters’, who are still managed and booked by CHI Entertainment. Since 1980, Ron has lived in Atlanta Georgia, where he has been CEO of his own business, Master Blaster Music, where he hosts and emcees all types of events teaching up-and-coming entertainers on the importance of music rehearsing and internal life management skills.

It is a pleasure to welcome Ronald W. Laster, Sr. as a member of the Niagara Falls Music Hall of Fame Class of 2019.