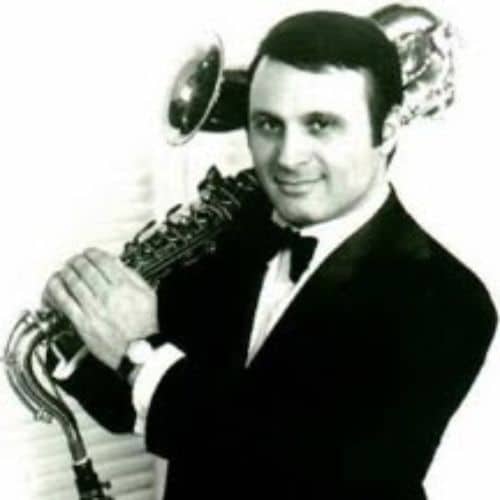 Nino was born in Niagara Falls New York with the given name Antonio (Anthony) LoTempio. He was a musical prodigy, singing and dancing in recitals at age three and winning a national radio talent show at age four. A few years later, he took up the clarinet, inspired to learn the instrument
after a brief stint singing with Benny Goodman’s band. On a family bet, 7-year-old Nino walked onto the stage and asked Benny Goodman if he could sing with the band. Not planned at all, Mr. Goodman asked what he would sing and Nino replied ‘Rosetta in the key of C with a tag at the end’ and he TORE ‘EM UP. At Goodman’s request, little Nino returned to Shea’s Buffalo Theater for the next six nights. This was the debut performance in a career that would span over 80 years. Soon after, the LoTempio family moved to California to further the artistic interests of their children. Nino
added the saxophone to his musical arsenal; the sax he plays today is the same one that his father bought him when he was 10 years old. In 1945, Nino became a child film actor, first appearing in a couple unbilled films then followed with a credit role in ‘The Red Pony (1949)’. He played in high school dance bands, then began to carve out a career as a session musician, playing the saxas well as arranging and composing for artists like Rosemary Clooney, Bobby Darin, Steve Lawrence & Eydie Gorme, and later on for Frank Sinatra. He also worked intermittently as a big band musician for Horace Heidt and Maynard Ferguson. He continued to appear in movies; ‘The Glenn Miller Story (1954)’, ‘The Girl Can’t Help It (1956)’, ‘Johnny Trouble (1957)’, ‘Bop Girl (1957)’, & ‘Operation Petticoat (1959)’. By the late ’50s, he was recording under his own name and with his sister, April Stevens. In 1959, they co-wrote the music and lyrics to her hit ‘Teach Me Tiger’. He became a member of producer Phil Spector’s studio
band, aka ‘The Wrecking Crew’, where he met and became friends with Atlantic Records’ president and pitched him on the idea to record him and his sister’s duo act. They were signed to Atlantic’s subsidiary Atco label and released a revival of the 1931 song ‘Sweet and Lovely’, which grazed the charts in the summer of ’62. Their revival of the 1939 song ‘Deep Purple’ for which they are best known, hit #1 on the Hot 100 and #17 on the British charts, won the 1964 Grammy Award for Best Rock and Roll Recording, sold over one million copies, and was awarded a gold disc.

Tempo and Stevens continued to record many songs that did and did not reach the charts. The arrival of the Beatles and the rest of the British Invasion tended to marginalize the duo’s brand of pop music, but they continued in the same vein. Over 50 years, they signed with various record labels to include RCA, Atco, White Whale Records, MGM, and Bell. In 1973, Nino Tempo and his band 5th Avenue Sax scored #53 on the Hot 100 with his mostly-instrumental song ‘Sister James’, which was the first instrumental disco record to score on national charts. In 1975, he played saxophone on John Lennon’s album ‘Rock ‘n’ Roll’, and was a featured soloist on The Kenny Rankin Album in 1976. Nino continued to play, compose and produce music well into this century. He toured all over the world as a solo artist and with his sister and has had a long career as a session musician. He is an all-around performer, singer, dancer, saxophonist, clarinet player and even plays a bit of harmonica, guitar and of course acting. Since the ‘90’s and well into his 90’s, Nino Tempo has been performing as a jazz musician in Arizona, Nevada and California. His music can be
heard all over the world on radio, television, movies, and available on the internet via YouTube, Spotify, Pandora, Apple Music, Deezer, Play Music, iHeartRadio and TuneIn. In 1999, he and his sister were inducted into the Buffalo Music Hall of Fame.

NOW with great pleasure and honor, we welcome Nino Tempo (Anthony LoTempio) as a member of the Niagara Falls Music Hall of Fame, Class of 2019.