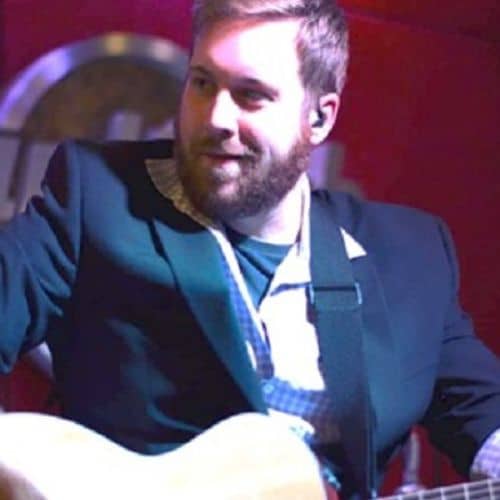 Mike Hatalak, a native of Niagara Falls New York, is a producer, engineer, composer, singer, guitarist specializing in hard rock and heavy metal genres. Since he was a child he has been playing guitar and as a teenager started playing in various Western New York recording and touring bands; Shortness of Breath, Plain of Ashes and Stricture. In 2003, he joined the national touring and recording hardcore metal band IT DIES TODAY, as a guitarist, songwriter and producer. The group was signed with Trustkill Records, home of many hardcore heavyweight music artists and groups. Their debut full-length album, ‘The Caitiff Choir’ sold over 25,000 copies within four months and allowed the band to sell out two national headlining tours. Alternative Press named IT DIES TODAY as a “Band to Know” in 2005. To date, the album has sold over 100,000 copies. In 2005, Mike and the band went on a series of whirlwind tours throughout Europe including tours supporting Bleeding Through, Walls of Jericho, All That Remains, and Throwdown. They also appeared on the PETA-sponsored ‘Compassion Over Fashion’ tour with Most Precious Blood and Remembering Never. The group also supported metal bands such as God Forbid, Machine Head and The Haunted, as well as securing a spot on the coveted Ozzfest second-stage that summer. Notably, Mike is also a producer and sound engineer who owned DWS Studios in Niagara Falls, New York. In 2006, he co-wrote and co-produced their second album ‘Sirens’ which was followed by a tour performing in more than 30 US cities. A song he wrote from the album, ‘Sacred Heart (Sacre Coeur)’ was featured in the 2009 film ‘Jennifer’s Body’. Their third album ‘Lividity’ was released in 2009 and immediately they embarked on a North American tour followed by an international tour performing in many Australian cities hosting the Australia’s Soundwave Festival in 2010. That year, they also performed at the Mountain Metal Mayhem Festival in Berlin, New Hampshire with other international hardcore metal bands. From 2003-2015 with IT DIES TODAY, Mike has performed 136 live concerts, his music has been on MTV television and radio, and has had over one million viewers on YOUTUBE. Mike Hatalak is also a TOP CALL producer and engineer for many national and indie record labels. Some of the national bands have included Herod, Sons of Azreal (featured in Metal magazine), The Last Reign, Still Remains, Dead Hearts, Roses are Red and STEMM, all heavy metal bands from Western New York who have toured internationally. He produced and wrote music that has been placed on the ULTIMATE FIGHTING CHAMPIONSHIP (UFC) television programming as well as another major motion picture, ‘The Cave’. He was a composer for the music in the film ‘The Ghouls Next Door’ written and directed by Niagara Falls native film director Ken Consentino. He is a guitarist and singer for the local band Tiny Music; a production technician at Seneca Niagara Resort & Casino; and also a writer with fellow musicians Joe Cafarella and Danny Nelligan of STEMM (2019 Inductees) for Seeing Red Music, a website that focuses on son songwriting, music publishing, production music and artist development services. It is our pleasure welcome Michael Hatalak as a member of the Niagara Falls Music Hall of Fame Class of 2020.

It is our pleasure welcome Michael Hatalak as a member of the Niagara Falls Music Hall of Fame Class of 2020.