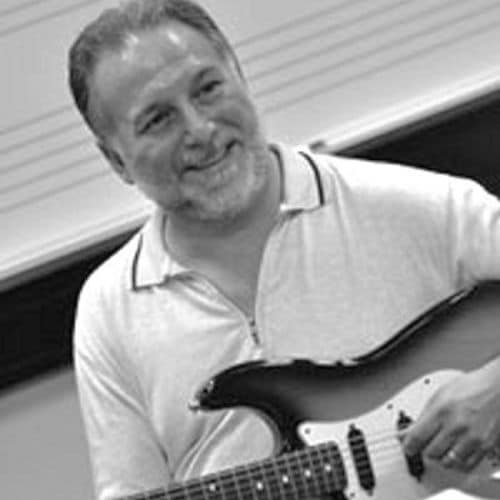 John Marasco was a left-handed guitar player born in Niagara Falls, NY, who had a love of music at an early age, being surrounded by many
musical family members. He began taking his first guitar lessons at the age of eight from Peter Cicero and continued studying music for over 55
years. John had a great passion for playing, learning and teaching music.

His teaching career began at Jerry D’Amico Music in Niagara Falls and finished after 34 years at Berklee College of Music as an Associate Professor in the Guitar Department. John began his performance career at the age of 16 playing at Lou Morell’s Club and the Ontario House in Niagara Falls with seasoned jazz musicians who influenced his career and his love for jazz.

John eventually settled in Boston, attending Berklee College of Music as a student before being invited to join the Guitar faculty in 1985. John was a tremendously versatile guitarist, performing in a wide variety of settings, from solo performances to symphony orchestras throughout New England. An exceptional reader, he regularly played in theatrical productions, including A Chorus Line, Chess, Little Shop of Horrors, Will Rogers Follies, Good News, Pippin, Showboat, Annie, West Side Story. John was a founding member of the Berklee faculty guitar ensemble: “The BeBop Guitars”, with whom he recorded two albums, The BeBop Guitars and More and Freshly Painted Blues.

As an educator, John influenced the lives of many a guitarist in the United States and abroad. He traveled to Korea, France, Greece, the United Kingdom and the Caribbean, performing in concerts and working as a clinician. John viewed his classes as a way not only to teach techniques and skills but to continue to grow in his own musicianship. He was constantly composing new material to use for exercises and demonstrations in class. He taught thousands of students and mentored many of his colleagues. In John’s words: “The guitar is one of the most popular instruments in the world. From its beginnings in classical music to today’s popular music, the guitar is heard in a wide spectrum of styles. I’ve always liked to play in many different styles, which has served me well over the years. Being able to play in various styles has helped me to work in many different
situations, playing everything from classical to jazz to blues to rock. The guitar is versatile, but it’s also very hard to master.” “I’m a jazz musician first and continue to work at becoming better at this challenging style, but I love many other ways the guitar is played, and I learn from them as well. I try to be like a sponge and absorb whatever I can.” “I try to be flexible with my students. I try to let them know what I think is important, the nuts and bolts of being a musician, and work to help them reach their musical goals. You have to be able to play, to execute things on your instrument. You have to have great ears, and you have to have a great sense of time.

It was while John was touring with The Lettermen, early in his career, that he met the love of his life, Connie, with whom he shared 32 years of marriage before his passing on September 11, 2018. John’s love for music was only surpassed by his love for his family. Family and music are what mattered most to John, and he generously shared his love for music and for life. He lived his life with great passion for all he believed in and he influenced many along the way. He was a friend to everyone he met and was always willing to help anyone in any way that he could. Our world is a better place because we had John Marasco in it.