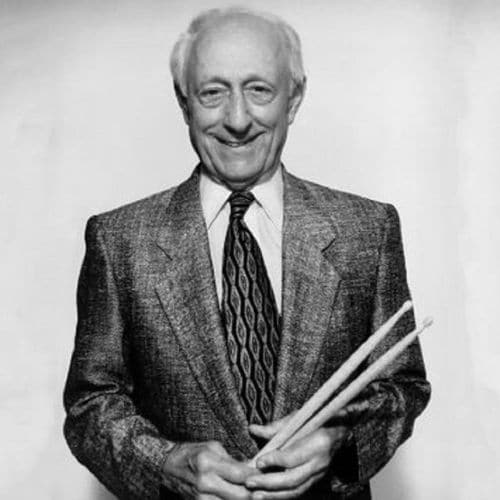 Born in Niagara Falls New York in 1921, Joe Calato, drummer and inventor of Regal Tip drumsticks is the owner of J.D. Calato Manufacturing company, a family-run business, based in his hometown, where he has lived his entire life. Joe started playing the drums when he was 13 years old and retired at the age of 93. For 80 years, he performed with Niagara’s finest musicians and band leaders to include Bernie Goodman, Hal Palumbo, Tony Scibilia (and the Untouchables), Lou Morrell, Tommy Tedesco, Joe Tedesco, Russ Messina, Don Gais, Tony Paonessa, Sam Morreale, Joe DePietro, Mickey Kay and many others. While serving in the Air Force in 1942 as a lieutenant navigator on a B-17 bomber, he also played drums in military jazz groups and dance bands. More than being a drummer, Joe is known around the world for introducing the first nylon tip drumstick in 1958. This tip lasted longer than the standard wood tip stick, and the sound it produced was loved by many. In addition to giving the percussion
market a new type of drumstick, Joe significantly improved the quality of drumsticks he manufactured. He was the first drumstick manufacturer to inspect and pair drumsticks. He offered a finish that, to this day, is superior and he has insisted that anything he sells to a drummer be of first-rate quality. He also improved the quality of drum brushes. Regal Tip brushes remain the best-selling drum brushes around the world. Drummer magazine honored Joe Calato with their Editor’s Award, stating that he was responsible for the quality of drumsticks and drum brushes in the market today. Joe Calato has received many accolades for his contributions. He is a member of the Buffalo Music Hall of Fame and also the Percussion Arts Society Hall of Fame. He and his company have supported percussion education and clinics in the Niagara Falls area and all over the world.

Every year money is budgeted for music education. One time, music educators in the western New York area were invited to an afternoon lunch featuring demonstrations by Saul Goodman, principal percussionist with the New York Philharmonic, John Beck, head percussionist at Eastman School of Music in Rochester, and Gus Barbaro, percussion educator at Edinboro College in Pennsylvania. Joe has brought many world-renowned musicians to his factory and home, sharing his love of music and his hometown. Admirably, the Niagara Falls address is on each and every pair of drumsticks, drum brushes, mallets, conga sticks, Blasticks, and percussion accessory made here and sold around the world. Joe started making drumsticks in his basement 60 years ago. Since then, he has employed many local residents and has been recognized by Opportunities Unlimited for hiring people with disabilities, allowing them to gain financial independence and self-esteem.

It is an extreme pleasure to honor and welcome Joe Calato, as a member of the Niagara Falls Music Hall of Fame Class of 2018.