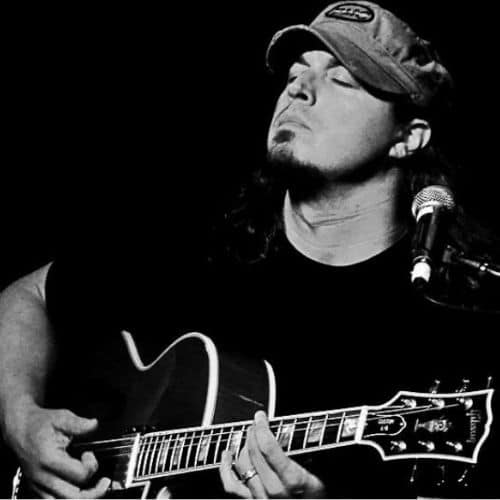 Jamie Holka, a native of Niagara Falls New York, at the age of 14, picked up a guitar and has not stopped playing since. In 1986, with his first band Stormbringer, he literally took storm competing in the Niagara Wheatfield Battle of the Bands, and then was regularly playing CYO dances and at
Club Soda. After high school, he started playing in clubs throughout Niagara Falls and Buffalo with the band Rock the Mob, who were a mainstay every Monday night at the popular Buffalo New York music venue Blind Melons. Jamie has been a full-time guitarist in the Western New York area since he was 18 years old. In pursuit of perfecting his talent, he has been a member of many local bands to include Jamie Holka & the Dress Pillows, Spinning Room, Animal Grace, One Big Magic Circuit Breakers, Powertrain, Brothers of Invention, Stringed Edition Guitar Ensemble, Jim Wynne Band, The Struggle, The Jamie Holka Family Band, The Jamie Holka Trio, Old Grey Whistle Test, Out on the Tiles and many other groups that he arranges for special music performances or events. Jamie attended the Berklee College of Music in Boston, Massachusetts and then continued to study jazz guitar long after his Berklee days. Jazz is the foundation for his multi-layered arrangements. He prides himself and is admired as a solo finger-style guitarist dedicated to performing energetic and complex finger-style techniques with the use of percussion effects on the guitar. His style incorporates many layers that assimilate bass, drums, chords and melody creating quite a diverse sound. Since 2005, Jamie has also been performing as a solo artist. In 2006, he took third place in the North American Rock Guitar Competition. He has been a support act for many classic artists such as Allan Holdsworth, Todd Rundgren, Michael McDonald, Steve Morse, Steve Miller, Little Feat, Kansas, Steve Kimoch, John Popper, CCR and Adam Rafferty. With Adam Rafferty, another finger-style guitarist from New York City and Germany, Jamie has hosted several concerts in Niagara Falls and Buffalo. Early in his career, while performing with the band The Spinning Room, Jamie and his bandmates played various cover tunes prominent with guitar to include the ‘70s progressive/jazz fusion cult band Captain Beyond. Jamie is now a current member of the group who has been touring with original member, drummer Bobby Caldwell.

It is with great pleasure to welcome Jamie Holka as a member of the Niagara Falls Music Hall of Fame Class of 2017.