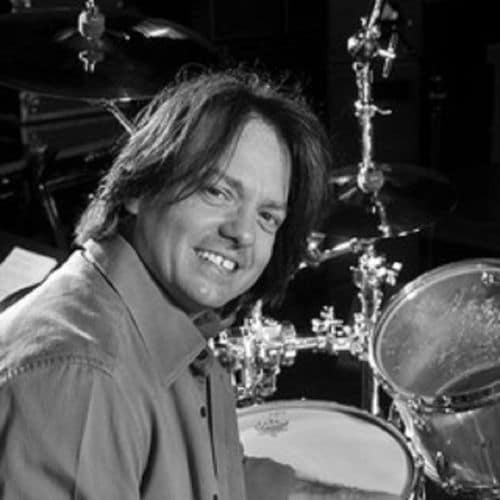 Jack Gavin started playing drums in his hometown of Niagara Falls New York. Early in his musical journey, he played with fellow-inductees Mark Dixon, Carl Filbert, Perry Novak, and Marcangelo Perricelli as well as Tony Beccari in the “Buffalo” circuit band TaTa Swan. After graduating from Niagara County Community College, he finished his studies at Kent State University in Ohio with a bachelor of music Performance in 1983. He trained under Cleveland Philharmonic Orchestra Percussionist, Donald Miller; Buffalo Philharmonic Orchestra Principal Percussionist, Lynn Harbold; and Tommy Dorsey’s drummer and Buffalo State University professor, Louis Marino. Jack’s innate talent, performance experience, and training in classical and jazz music prepared him for a career that would lead him to philharmonic orchestras, symphonies, and ensembles as well as modern rock, pop, and country. The down beat beginning Jack’s career was with Mel McDaniel, who was the first of many world tours for Jack. In 1986 Jack began his career with the legendary Charlie Daniels Band. Jack is known for his high-energy performances, and as Charlie’s drummer, Jack shared his talent every night. Jack toured and recorded with Charlie for fourteen years before becoming band leader and drummer for Tracy Lawrence in 1999. In 2003, he began working for Tanya Tucker. While working for Tanya Tucker, Jack played drums, recorded albums, was musical director and managed both tour and production. Jack worked for Tanya for ten years. Jack has performed with a variety of other artists over the years, including: Willie Nelson, Ted Nugent, Travis Tritt, John Kay of Steppenwolf, Colin Raye, Jamie O’Neal, Ronnie Milsap, PamTillis and Dolly Parton. It is because of Jack’stalent and work ethic that he has been offered opportunities to perform with such a wide range of artists while endorsing Remo and Regal Tip as well as Zildjian and Gretsch, which he has endorsed for over thirty years. Currently, Jack manages several up and coming artists and performs as a studio session musician. Most recently, Jack has been performing with T. Graham Brown. Jack runs his own studio out of his home where he holds rehearsals for the artists he manages. Additionally, Jack shares his passion for music with the next generation at Lipscomb University’s School of Music where he is an adjunct professor. Jack, who has been a Gretsch endorser for over thirty years, now represents The Gretsch Company as the Nashville ambassador. Whether performing in a live show, managing artists, or teaching young musicians, Jack’s love for music reigns. Jack Gavin exemplifies a hardworking, well-rounded talent in the music industry. From his start in Niagara Falls, to the rehearsal halls of Kent State University, to stadium performances around the world, to the School of Music at Lipscomb University, Jack Gavin has contributed to music across genres, disciplines, and generations.