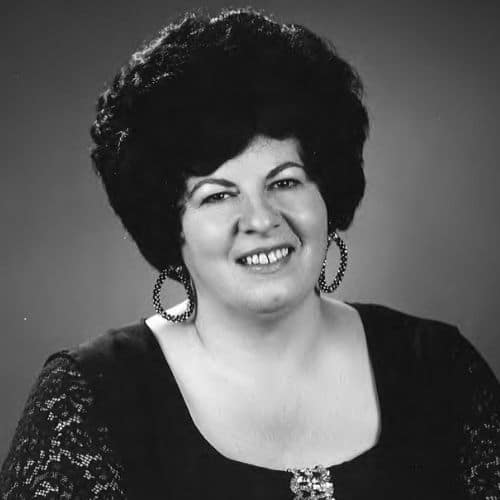 Harrietta, popularly known as ‘Hank’ was an admired jazz vocalist for over forty years. Born and raised in Niagara Falls, New York, she began her singing career as a member of the glee club at St. Mary’s High School, where she studied music and phrasing under director Henry Zimmer. Those early lessons became part of her musical style, as she was always meticulous with her phrasing so the audience heard not only each note but also every word. Her first professional engagement was at the Boot and Saddle Club, where she performed with Frank Rotella. She quickly became a local favorite and sang at countless clubs and restaurants, which included the Horseshoe, Red Coach Inn, Boathouse, Prospect House, Frontier House, Buena Vista, La Hacienda, and John’s Flaming Hearth. She became a member of the Niagara Falls Musicians Association and in her later years was an active performer in the Niagara Falls Little Theater. She also worked in California for a while, where she was the featured solo artist on the album ‘An Evening at the Royal Tahitian’. The album was well received and she was compared to Ella Fitzgerald, Sarah Vaughan and Pearl Bailey. Missing her family, she returned home and continued to sing with many well-known local musicians such as Lou Morrel, John Hasselbeck, Norm Cohen, Bibs Pieroni, Carl Stewart, Lou Barone, Jimmy Corsaro, Niagara Falls Music Hall of Fame inductees; Ron Corsaro. Tommy Tedesco and Thom Rotella. At the time of her passing, she was singing with the George Beck Orchestra. She will always be remembered for her vibrant, strong voice and incredible vocal range, and although she looked and sang like a diva, she regarded herself as just another musician on the bandstand. When a musician struck a particular groove or harmony she would turn with a huge smile, a shriek of delight, and a thumbs-up sign, making sure the audience knew who to applaud. She also loved her audience and touched individuals one by one with her deep regard for people. She was a vibrant performer with a spirit filled with love, generosity, and wisdom, accepting everyone without question or reservation. As she so often told people “Think happy thoughts, and be good to each other”.

It is with great pleasure that we honor and welcome Harrietta ‘Hank’ Hamam as a Legacy Inductee of the Niagara Falls Music Hall of Fame Class of 2021.