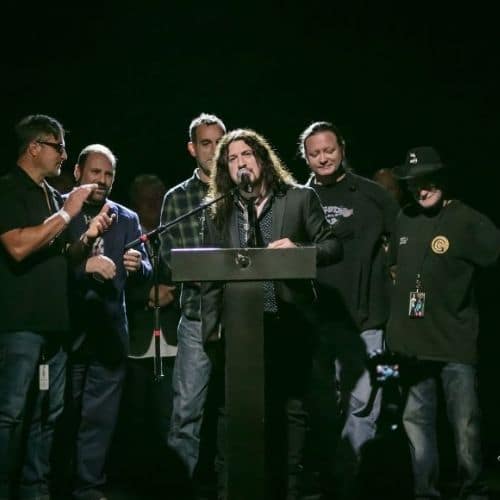 God’s Children was born in 1989 in the backstreets of Niagara Falls, New York where they quickly became the torch bearers of original rock and roll music, standing out among the many cover bands populating the area. Through incredible radio support and widespread word of mouth, the band was the first mentioned to open for national acts coming through the area and a premier headliner in Western New York. Their reputation as a live band spread far beyond the hometown that spawned them. Frequent tours to New York City being regulars at the world famous CBGB music club, Boston, Philadelphia, Cleveland, Erie and many other major markets throughout the northeast cemented their reputation as fiery performers and continued to ad their ever-growing fan base. God’s Children had their own record label D.I.O. Records. Along with their producer Michael Sak (who also produced Buffalo’s Goo Goo Dolls), God’s Children produced a thousands-selling debut album ‘My Snake’, followed by four more-full length albums and a slew of single songs heard in film, movies and television shows. God’s Children music is heard on a multitude of movie soundtracks to include the Warner Bros hit ‘Vegas Vacation’, Disney’s ‘Man of the House’, the CBS movie ‘The Good Doctor’ and HBO’s ‘Hard Justice’. Around the world, their songs appeared on highly rated prime time television shows as ‘The X-Files’, ‘Lois & Clark: The New Adventures of Superman’, ‘Touched
by An Angel’ and the premier episode of ‘LA Firefighters’. God’s Children was profiled on ‘Entertainment Tonight’ and their music was continuously heard on the soap operas ‘Guiding Light’, ‘Another World’, and ‘As the World Turns’. Although God’s Children disbanded in 1999, after recording their last album in Las Vegas, they do perform an annual reunion show for their devoted fans in Niagara Falls, New York. The members of God’s Children are Peter Ajemian (guitars), Peter Vincent (vocals), Bruce Wojick (guitars and vocals), Leo McDonald (bass), Mark Pirolli (drums) and is not complete without their sixth member; lighting director, stage and equipment manager, Jimmy Jones.

It is a pleasure to welcome the group God’s Children as members of the Niagara Falls Music Hall of Fame Class of 2019.