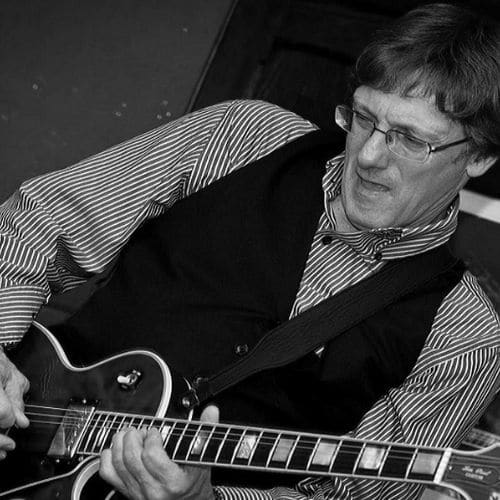 Frank is a self-taught guitarist greatly influenced by his parents both classically trained musicians (Conservatory of Music, Cincinnati, OH). During his formative years, he performed regularly with a variety of cover bands. In 1969 Frank joined OZ an all- original project. The band was greeted with strong interest by John Pozer of United Artist Records. In 1972, Frank was working with another original band, Hood Robin. John Pozer took personal interest in this band and became its manager and producer. During the winter of 1976 Frank moved to Los Angeles where he joined The Terry Williams Band, Terry was co-founder of The First Edition along with Kenny Rogers. The band was signed with Warner-Curb records. Frank returned to Western New York in 1983, since then he has performed with many award-winning bands including The BBC Band, NRG, Legend, Omega, The
Barracudas, Slam, Zola, The Fabulous USA Band, Stargazer, The Rockers, The Frank Grizanti Band, Weekend, The Road, Junction West, The Reinhardts, The Patti ParksBand, The Ifs, The Boys of Summer, Jack Prybylski. Frank has played on recording projects for great local talents such as Ken Kaufman, John Valby, Bob and Diana Volkman, Pete Howard, Maria Sebastian, Mark Dixon, Tom Sartori, Pam Ryder, Nick DeStephano, Melissa Croff, and Bass Reeves. He has recorded in L.A., Toronto, Nashville and Buffalo.

Frank continues to wow crowds with his soulful and intricate guitar playing and performs regularly with The BBC Band, The Frank Grizanti Band, The Rockers, The Patti Parks Band, The Reinhardts. As a producer, Frank has worked with Robbie Knoikoff of Audio Magic for artists such as Bass Reeves, Maria Sebastian, Rich Blend, Pat Gordon and The Fabulous USA Band. Professional Memberships: ASCAP, writer since 1975, publisher since 1998.

It is with great pleasure to welcome Frank Grizanti into the Niagara Falls Music Hall of Fame Inaugural Class of 2017.