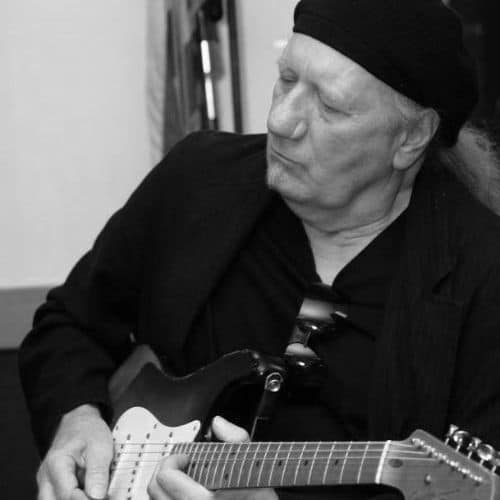 Ed Supple has been playing the guitar publicly & privately since 1965. In the 70’s he was a member of the groups Backstreet, Street Noise, Avalanche & Lunch to name a few. Over the years he has performed with many bands, as a solo performer, and as a featured guest at a variety of public &
private events. His entire career has been in music not only as a musician, but also as an educator, promoter & salesman. Ed started teaching the guitar at D’Amico Music in the early 70’s & continued for many years. Also in for programs at the ‘old’ DeVeaux school, and for over ten yrs at WNY Blues Society AMJAM Guitar Workshops. He has been giving private guitar lessons for many years. Notably known for his unique ‘Suppling’ finger style playing, he has taught many local & national recording artists his prowess. In 1983, he moved to Los Angeles, created his own group ESP & worked with various guitar manufacturers at the NAMM trade shows, refining existing products & in some cases, developed musical product prototypes. Ed was an instrumental help to local luthier Eric Stets with his Stetsbar Tremolo system. In 1996 he moved to Nashville, Tennesse where he worked as a session/studio/backing musician aka ‘ghost musician’ for many recording artists. He played guitar and other instruments behind the scenes either dubbing over original recordings (for sound or accuracy) or creating tracks to be used in live performances. Although he was a professionally paid musician in both Nashville and Los Angeles, he unfortunately is not publicly recognized or credited for his work on hundreds of recorded songs that have been heard at live concerts, on the radio, in music videos, on cds, cassettes and lp’s. However, he does have a few song credits with Michael Lee Jackson (of Animal Planet) c1995, Buffalo Sabres’ Jim Lorentz c1980’s, whom he also toured with in the 1970’s, and NFMusicHOF 2018 Inductee Mark Dixon c1970’s-80’s. Ed Supple has a couple film credits as well; he appears in an interview segment in the 2018 film, ‘The Genius of Lenny Breau Remembered’ and he is one of the creators & featured guitarist in Karan Andrea’s instrumental DVD, ‘Guitar Player Wanted, Vocals A Plus’. In 2003, Ed returned to WNY to care for his mother. Since 2010, he has received many endorsements & attends NAMM trade show in Los Angeles, promoting & representing various music companies & luthiers to include: BC Rich, Pigtronics, Fret King Guitars, Nailor Engineering, Fuchs Amps, Duane Allman Slide, Neal Moser, Pearce Electronics (Buffalo NY), & Top Shelf Music (Buffalo NY) & GMW Guitar Works (California). Ed Supple is notably an outstanding guitarist He also sings, plays harmonica, & has been avid music producer, educator, promoter & salesman. In addition to working & teaching at D’Amico Music, he also worked for Brundo’s Music & Recordland at Summit Park Mall for many years. In addition to promoting & selling tickets, teaching guitar, he was an outstanding record promoter of many genres, working closely with music promoters to bring popular acts to stages to Western New York. In 2013, Ed Supple was inducted into the Buffalo Music Hall of Fame.

Now it is our pleasure to welcome Ed Supple into the Niagara Falls Music Hall of Fame Class of 2019.