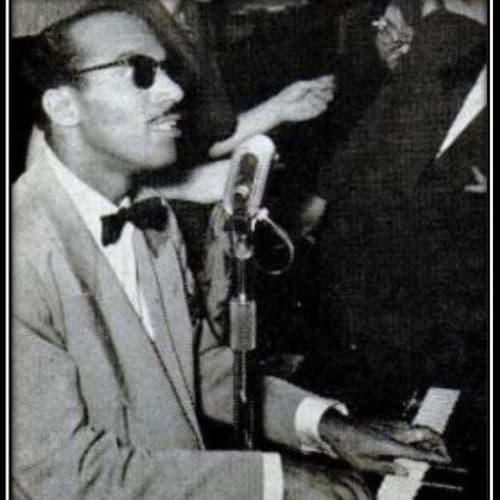 Donald Elton Gais, born in Niagara Falls New York, was an internationally acclaimed jazz pianist and singer who performed for many years in the United States and Europe. At eight years old, he was already playing the piano at First Evangelical Church in Niagara Falls. By the time he was a teenager he needed no introduction to piano fans in school, when he accompanied several performers and rendered solo performances. Soon he
started performing as a tenor with the Niagara Falls High School Mixed Choir and the High School Acapella Chorus. At age 19, Don was the featured pianist with the Russ Mateer Orchestra performing with drummer Gene Krupa. At 21, he started his own band ‘Don Gais and The Silken Rythym Orchestra’. He performed extensively throughout Western New York with his band and also provided piano accompaniment for the Freddy Jones Dancers. During WWII, Don had the opportunity to perform as a pianist in Europe while serving in the United States Army. When he returned to the
states, Don worked in the Buffalo music scene with Charlie Wallace, CQ Price and Pete Suggs. In 1947, Rex Stewart who once worked with Duke Ellington, brought him into his orchestra, where Don is featured on the first recordings. Soon he was back in Europe recording and performing. When the tour was over, he settled in Copenhagen Denmark. There in 1949, he played in a trio with Helge Jacobsen; guitar and Thrond Svennevig; bass, recording two songs for the label Tono, including a cover version of ‘On the Sunny Side of the Street’. It was followed by further recordings when he performed with the vocal quartet, Three Reinerts and Susie. In Basel Switzerland, he recorded in January 1950 in another trio setting with Simon Brehm and Alf Johnsson, and in August with Georges Schaller and Wallace Bishop for Austroton. During the 50’s and 60s, he frequently performed throughout Europe, eventually living and performing regularly in Paris France. An account of Don Gais’ musical life is featured in the March 26 1952 edition of ‘Jet’ Magazine. Frequently he was featured in ‘Jet’ for his extraordinary talent and memorable performances. In the late 50’s, he appeared mainly in the club scene of Basel; there he took in 1958 with Paul Girard and Pierre Favre and recorded the album ‘Jazz at the Atlantis No. 1’. In 1969 he performed in the Frankfurt Plaza Hotel in Germany and the following year became the club manager and host of The Esquire Club in Weisbaden Germany. In 1971, he returned to the United States, started the Don Gais Trio and performed throughout the city in places like The Circle at the Parkway Inn, The Red Coach Inn, Treadway Inn, Cousins Lounge, Barney’s Grandsons, and The Alps. He played radio broadcasts on WEBR ‘Jazz in the Nighttime’ from the Buffalo Colored Musicians Club. During this same time, he was also the musical director at Emmanuel Baptist Church here in Niagara Falls. Don was the consummate entertainer with a very outgoing personality that really worked the crowd.
He was also a musicians’ musician. He hosted Thursday night jam sessions regularly at his house on North Avenue for anyone who wanted to stop by and sit in. Don had a wonderful life in which music played a key role, but the love of his life was his wife Wanda.

Long overdue, it is an extraordinary pleasure to honor Donald Elton Gais and his legacy in the Niagara Falls Music Hall of Fame Class of 2018