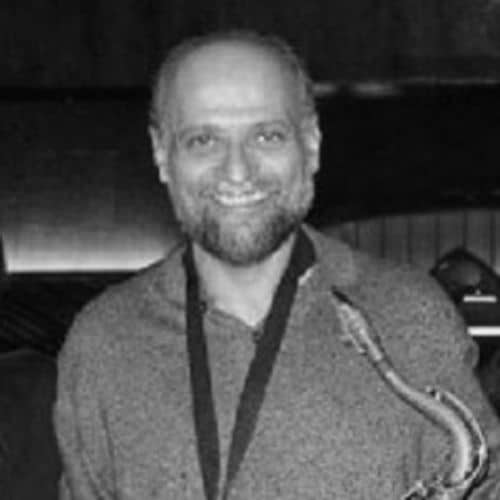 Chu Nero was a remarkable saxophone player who dedicated his life to spreading the Gospel of Jesus Christ through his music, affecting the lives of all everyone he met. He shared the stage with some of Western New York’s music greats of every genre. He had many Music Ministries throughout Niagara Falls and Buffalo. Chu started playing music at the age of 11 after hearing Sonny Rollins with his son on one of his earlier albums. For the next 50 years, Chu honed his great gift and shared it with the world alongside his most beloved fellow musicians and comrades. In high school, he played in the school’s dance band with other talented musicians to include Bobby Jones, Joe Trunzo and Dom Mitro. From 1979-2009, he performed with Ray Domanski and Bud Fadele as the Chu Nero Trio. He even took his prodigious legacy on USO tours to Kyrgyzstan and “wowed” our troops
overseas. Although an incomparable jazz tenor saxophonist, Chu was also a fabulous keyboard/piano player; and had a most beautiful voice. It was chided that Chu could be locked up for an hour with a foreign instrument and emerge playing it as if trained. What an awesome talent he was. Chu earned several music awards as well as a second Buffalo Music Award at the time of his death in 2009.

Chu’s love for Christ was revealed and echoed during every performance “live or recorded”. Never was there a time when he did not acknowledge his Savior as his greatest source of inspiration. It is difficult to capture in words the ineffable musical talent that was Chu Nero. He embodied the heart and soul of every note he played; every tune he sang. He was the kind of rare and precious gift that comes along but once in a lifetime. He was an
exceptional musician and uncommonly rare and wonderful human being. Grateful are all we who were blessed to have known him. A childhood friend of his said it perfectly “At the very least, artists like Chu are very fortunate in that, with their music and talent, they leave ‘footprints in the sand’. They may have traveled on, but we know what they have done by the music they left behind for us. The art is definitely not the physical
manifestation of the artist, but rather the spirit.