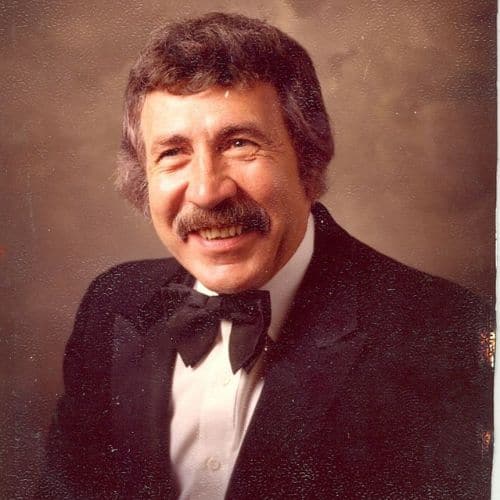 Charlie was born April 13 1930 in Niagara Falls, New York. At a young age, he learned to play the guitar, studied under local musicians Vince Brundo and Pete Cicero, and later also became a guitar teacher. He also played the mandolin, banjo and other string instruments, performing for various events in and out of town and at many local music hotspots in Western New York. In the 1950’s, Charlie Chiarenza moved to Los Angeles and became a studio musician like his good friend Tommy Tedesco; Niagara Falls Music Hall of Fame 2017 Inductee.  In the early 60’s, Charlie played with various groups in studio and popular night clubs.  He became associated with the best musicians around and came to know many of the performers. In 1966, he traveled with Mitzi Gaynor as her guitar accompanist when she sang “Georgie Girl” at the Academy Awards.  Then in ‘67, Charlie replaced Bud Coleman in the Julius Wechter and the Baja Marimba Band; which was a very popular faux-Mexican band formed using session musicians encouraged by Herb Alpert of the Tijuana Brass. Both the Baja Marimba Band and Tijuana Brass were owned by Herb Alpert and Jerry Moss aka A&M Records.  The band toured the United States and Canada, also appearing on many television shows from the late 60’s through the 80’s.  With the band, Charlie performed with Jerry Lewis, Lorne Greene, regularly on the Jack Benny television show and also performed in Maxwell House Coffee commercials. Unfortunately the Baja Marimba band was among hundreds of artists whose material was reportedly destroyed in the Universal Studios fire of June 2008.  Charlie also performed with Burt Bacharach, as well as a screen extra in many television and motion pictures. From the 1980’s and on, Charlie co-owned and operated several restaurants in the Los Angeles area. This included his first Italian restaurant called Pasta Michi’s in Sylmar California, and a popular Jazz club called Alfonse’s Restaurant in Burbank, and Charlie’s in Valencia California. At these restaurants, many international celebrities to include actors and musicians dined, performed, and befriended Charlie. On Tuesday nights, he would invite guitarists to play and hang out.  It was a place where they always felt comfortable (since the owner was a guitar player).  Below is picture of one of their gatherings with Tommy Tedesco, Joe Pass, John Pisano, Charlie Chiarenza and Frank Zappa!  Charlie passed away March 14 2013.

It is a great pleasure and honor to welcome Charles ‘Charlie’ Chiarenza as a Legacy Inductee into the Niagara Falls Music Hall of Fame Class of 2020.