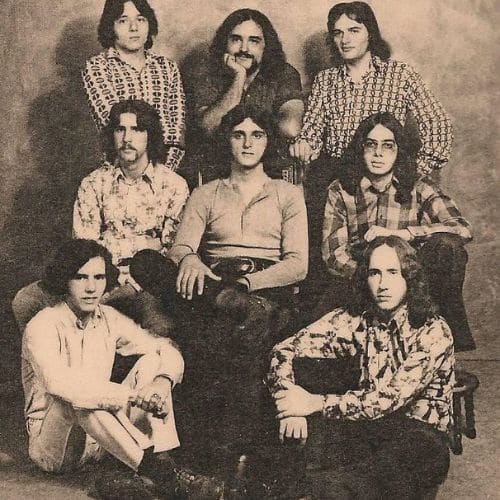 Beginnings is a Niagara Falls New York based horn group established in 1971, whose members have continued to excel in this area’s music scene over
five decades. As young teenagers in the early 70’s, members of Beginnings attempted complex horn songs and were one of the first western New York groups dedicated to the music of Chicago, Blood Sweat and Tears and Lighthouse. A mainstay at many Bishop Duffy dances and LaSalle Rec dances, Beginnings went on to perform many local clubs which included The Beer Barrel and The Gallery; and throughout western New York at The Caboose in Fredonia, The Zoo in Jamestown and The Surf Club in Bemus Point. Beginnings also performed concerts in Detroit Michigan and Toledo Ohio.

Each member of this renowned group later performed with many other Western New York musicians and are still performing today. Singer Chris Critelli went on to study music, sing opera and is now a retired Niagara Falls music teacher. Saxophonist Tony Nastasi is Niagara Falls elementary school teacher, who continues to perform with the A-List band. He has also been a vital member of the Bob Volkman Band, the Carl Filbert Band, Alias, and All About. Trumpeter Phil Palmeri and Trombonist John Davies (†), a 2017 Legendary Inductee, completed the brass section of the band. Both performed in various local bands for many years. Keyboardist Bob Volkman is an acclaimed composer, whose original scores have been featured in many PBS documentaries. Bob has been a pivotal member of many western New York groups over the years to include Everyday People, Raintree, Fantasy and Filbert and Volkman. Currently he performs with the groups BBC, Eli and with his wife, Diana in their own band and he is the musical director at Nativity Blessed Virgin Mary Church in Clarence New York. Guitarist John Navarroli, works extensively in the music scene in Ontario, Canada. He has owned and operated Navs School of Music in Crystal Beach for the past 17 years. Bassist Rick Catanese, has been a legendary essence in the groups Zola, Falls Street Rockers, Brimstone and he currently performs with the USA Band and the Frank Grizanti band. Rick owns and produces music in his own studio in Wilson New York. Drummer Mario Quaglia also went on to perform with the Bob Volkman
band, Alias, All About and Brimstone. As solo artists, each member rightly deserves to be inducted. Above all their individual successes, these talented and dedicated musicians have reunited numerous times over the past 48 years performing at Niagara Catholic (aka Bishop Duffy and Madonna) alumni school dances and will once again perform at LaSalle’s alumni REC dance in February.

Because of their dedication to their music “beginnings” and their overall group achievements, we are pleased to honor and welcome the first group,
Beginnings in the Niagara Falls Music Hall of Fame Class of 2018.